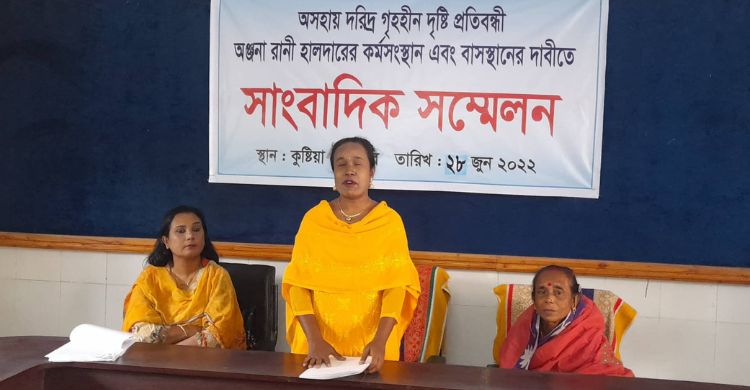 Rabiul Alam, Kushtia: A press conference has been held in Kushtia to demand employment and accommodation for the helpless blind and highly educated musician Anjana Rani Haldar. Anjana Rani Haldar read out a written statement at a press conference held at Kushtia Press Club's Abdur Razzak Auditorium at 11am on Tuesday. In a written statement, Anjana, daughter of physically challenged Mandari Haldar and Fulmala Haldar, who lives in an abandoned house on government land on Bibi Nandi Road in Kushtia Municipal Area, said, He has built himself up by holding the conviction of lifting. Starting from Kushtia School for the Visually Impaired, he completed his post-graduation in 2016 from Primary, Secondary, Higher Secondary and Kushtia Government College with honors in the latest history. At the same time, he has completed a 4-year diploma course in music education from Kushtia Shilpakala Academy. The purpose of this press conference is to draw the attention of the Hon'ble Prime Minister to get a job with a minimum standard of living in the current situation and a place like Matha Gonza. Through this press conference, I would like to meet the Prime Minister directly and request him to resolve the situation. Anjana was accompanied by her neighbor Rehana Ahmed, Anjana's mother Fulmala Haldar, Kushtia Press Club President Al Mamun Sagar, General Secretary Anisuzzaman Dablu, Editors Forum President Mojibul Sheikh and Television Journalists Association President Hasan Ali. Anjana’s mother Phulmala Haldar said, ‘Anjana has also left a mark of achievement by taking part in competitions of various cultural activities in her educational life. But it is a matter of sorrow and regret that the helpless landless blind Anjana has reached the age of government service even earlier. Phulmala Haldar claims that she has been going door to door with a job application with a place to live in her minimum life, but nothing has been done. However, Kushtia Social Services Department Assistant Director (Acting Deputy Director) Muhammad Murad Hossain said, "Anjana Haldar, who is born visually impaired, is a disabled beneficiary from the Social Services Department." It is good that she is now demanding a job after finishing her education, but she has to come to us and clarify what kind of work Anjana is qualified to do. Then we can work together to get a job according to his ability. '