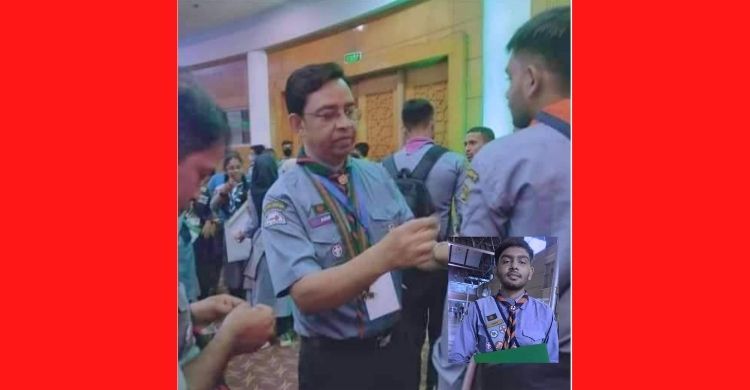 Nur Alam, Gopalpur (Tangail): Two scout members from Bhunapur, Tangail received the President's Scout Award 2019. Scout and Rover Scouts, who have achieved the highest qualifications through hand-to-hand training of scouts, have been able to win such high prizes. The 50th Annual General Meeting of the National Council of Bangladesh Scouts was held at the Bangabandhu International Conference Center on Monday afternoon. At that meeting, two scouts of Bhunapur Government Pilot High School of the upazila were given the highest prize President's Scout Award 2019. The awardees are former school scout members Adnan Adib Siam and Sabbir Hossain Bandhan. After showing the video on the implemented activities of Bangladesh Scouts, Dr. handed over the highest award of Bangladesh Scouts Silver Tiger and Silver Hilsa Award with the permission of the President. Md. Mozammel Haque Khan. In addition, President Scout Award and President's Rover Scout Award are given to the most qualified scouts and rover scouts through hands-on training. Out of 607 people in 2019, a total of 19 Scout Presidents from Tangail District received the Scout Award. Among them 2 scouts from Bhunapur Government Pilot High School. The locals of Bhunapur Government Pilot High School are happy and proud to receive such an award. Earlier in 2004, Abdullah Al Mamun, a scout member of the school, received the first President's Scout Award in Tangail district. Even in 2023, 3 out of 6 scout members of the district in South Korea in the Jamburi program are from this school. Award-winning scout members Adnan Adib Siam and Sabbir Hossain Bandhan said with joy that the dream of a scout member is to get the highest award, the President's Scout Award. We got it for the right direction from our head teachers and group leaders. In this regard, the school's scout group leader and assistant teacher Mohir Uddin said, the whole scout team including me is happy and proud of the success of the scouts. Today's success is due to the right and competent guidance of the headmaster of the school and the dedicated efforts of all. Since my joining, 4 scouts from the school have received this President's Scout Award and one more scout has been nominated for this award. Mohi Uddin, president and headmaster of the school's scout group, said, "I am very happy and proud to receive the highest award of two meritorious and deserving scouts of the school." The scout members of our school are very hardworking, qualified and efficient. For this reason, from the very beginning, they have been awarded more than once in a series of events at the upazila, regional, district and divisional national levels. We hope that the school scouts will be able to sustain this success in the future as well and that the activities will be expedited. Their success will brighten the name of the area including schools across the country.